What Does Federico Caprilli Have to Do With Jumping in America?

Federico  Caprilli (1868-1907), Captain in the Italian Cavalry, is credited with developing the system for forward seat riding. Today’s riders have had the benefits of his method for over 100 years but, before Captain Caprilli,most people who jumped their horses, rode like this: 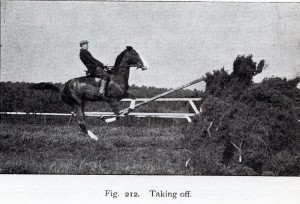 It looks like they’re being left behind, doesn’t it? But they rode like this on purpose. They believed that putting their weight over the horse’s shoulders made it hard for him to jump. Plus, they believed it was necessary to “lift” the horse over the jump by pulling up on the reins.

After Caprilli’s system began to spread, horsemen started riding like this:

Rodzianko tells us in “Modern Horsemanship“, “Caprilli taught that the rider’s chief aim must be to respond to all changes of balance by following the movements of the horse.” Caprilli believed that less was best. He was not in favor of collection for natural riding and taught riders to utilize their horse’s natural balance. He believed it was the rider’s job to interfere with the horse as little as possible.

In many ways, Caprilli was a “natural horsemen”, perhaps even a “horse whisperer” of sorts. He developed trust between horse and rider and made training more comfortable for the horse.  He believed in gentle persuasion as opposed to violent training and didn’t used the term “breaking” when referring to starting a young or green horse.

Although Caprilli competed in steeplechase and jumping competitions, his goal was to find the most comfortable  and efficient way for the men and horses of the Italian Cavalry to travel cross country.

Caprilli was trained in the high school dressage methods that were popular at the close of the 19th century . Rodzianko states that “While studying, he came to the conclusion that most systems of riding were unharmonious and forced.” Caprilli’s new ideas were not immediately appreciated by the Italian Cavalry. In truth, some of his military seniors were strongly opposed  to the revolutionary methods.  In “Riding Reflections”, Santini states Caprilli was sent to the South of Italy “…to cool his heels and his juvenile exuberance….”. One can only imagine how much his excitement about the forward system went against the grain of the establishment. When his riding accomplishments drew the attention of a Superior Officer, Caprilli was summoned to return from the south of Italy. He was instructed to make a presentation of his system to a special committee, using a troop he’d trained. The demonstration convinced his superiors that his system had value and in 1904 Caprilli became Instructor to the Cavalry School.

We are fortunate that Federico Caprilli dictated some of his method to a student, Bianchetti.  These notes were later translated into English  by Piero Santini and were published as “The Caprilli Papers“.  Two of Caprilli’s students, Piero Santini and Col Paul Rodzianko, had their own works published.

Federico Caprilli was not the only person of his day to have revolutionary ideas about riding forward. American Jockey, Todd Sloan, shortened his stirrups and changed his seat to a crouching position that was called “the Monkey Seat”.  Russia claimed that Cossacks had been riding forward for years. But until Caprilli, no one had developed a system of forward riding and Caprilli’s method has influenced jumping riders throughout the world, including those of us who jump in America.

Thanks for reading,
Barbara Ellin Fox