Horse Whisperers and Round Pen Trainers.  Not many of them like these labels.  Perhaps natural horsemanship is a correct term.  Certainly to call them “trainers” is not very defining but however you label it, the natural horsemanship system has caught on in a big way. For the purpose of my blog I’ll use the initials NH.

As horses moved from being necessary animals to being pets, they faced some  difficult times and for a while, their numbers dwindled. The NHers have done a lot to make people aware of past cruel treatment and as “new” methods were adopted, many horses moved into a kinder, gentler lifestyle. NH has become a big industry within the horse industry because it provides a method, a set of steps and levels, for horse lovers, particularly amateurs, to follow.  It’s provided the needed gurus, and games and principals for the average person to manage and enjoy their horse.  In other words, it’s taught horsemanship to non horsemen.  This is a good thing because the ordinary horseman, the pleasure rider, has become a huge segment of our U.S. Horsemanship culture. In fact, NH  has become a horse culture of it’s own.

Some NHers are good cowboys who  pass their knowledge along while making a living.  Others are promoters who have figured out how to package and market to a hungry public.  And others have used their skills to develop horse spectaculars that are awesome to watch. Aside from certain core methods, there is a common thread among NH trainers, the need to make a living.  But that’s a fairly common human need. 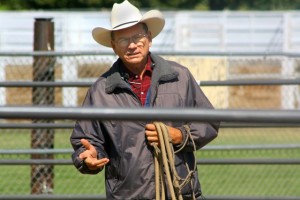 My favorite NH trainer is Harry Whitney. Harry doesn’t like labels. Harry teaches useful skills without all of the hoopla.  Yes a rope halter is useful, as is  a good rope, but you won’t find a table of colorful halters and varying lengths of ropes for different stages of training at Harry’s clinics.  Harry told me that I could use the skills he teaches in a forty acre pasture…IF I could run fast enough!  So being who I am, I tried it. And it worked . I didn’t even need to run that fast. Harry is as honest as the day is long.  He’s genuine and although he teaches NH for a living, he does it out of a love for horses. Harry is a good person (has a great sense of humor which I always miss) and I’d not hesitate to send any person or horse to him.  You can learn more about Harry at his website http://www.harrywhitney.com/

Frederic Pignon may seem to be at the extreme edge of NH but watching the horses perform in Cavalia is an experience of a lifetime.  Frederic has taken the relationship between human and horse into the twilight zone  and his spectacular is really spectacular. He and his wife Magali Delgado have retired from performing but not from horsemanship.  Their book Gallop to Freedom is a wonderful read.

What makes  NH work? Is it packaging? Tricks? Games? well maybe it’s some of each but the bulk of it is the genuine understanding of actions, reactions combined with the instincts of a natural born horseman. Most NHers attribute their training foundation to Tom and Bill Dorrance, either directly or indirectly.

Bob Lemmons (about 1847-1947) didn’t become a horse whisperer in order to better the lot of horses, but but being a mustanger, it became  his way of life.  And just like today’s NHers, he made his living “whispering”.

Bob was a slave. When he was about 7 years old, Lemmons moved to Texas with his owner John English in 1854.  About 10 years later, when he was freed from slavery, he went to work for Duncan Lemmons, from whom he took his last name.

Frank Dobie, in his book “The Mustangs” gives a most remarkable account of Bob Lemmons’ methods. He interviewed Lemmons when Lemmons was in his 80s. All  of Dobie’s books are interesting to read but I especially enjoy, The Mustangs.

When Lemmons would prepare to gather a wild herd, he thought like a horse and acted like one.  His purpose was to become the leader of the heard.  He’d spend as much time as it took to establish a relationship and then his place as leader.  He began by following the herd.  If the herd took off, he didn’t worry it by chasing after to keep up. He tracked it.  He’d make himself visable to the herd without applying a pressure that would drive it away.

When following a herd he rode the same horse and wore the same close in order not to change his scent.  If he needed supplies, coworkers were not allowed near him and they had to hang the supplies in a tree. Bob Lemmons would then transfer that to his own equipment to keep his scent the same.

Lemmons would again enough confidence from the herd that he could lead them to water, prevent them from drinking or allow them to drink.  He’s be suspicious of things mustangs were suspicious of and blot in the lead from things they would flee from. He could tell by actions and sounds what members of the herd wanted to do. He’d sleep with the herd and mingle with the herd.

Finally after weeks of being patient, living with and communicating with the mustangs, Lemmons would signal the rancher that he was ready to bring the herd in.  The hands knew what to do and had things set up so Lemmons could bring the herd in at a gallop, racing into the pen, as a hand let him out the other side.  Then the hands would set to their work of keeping the horses in a frenzy so they would remain trapped.

Dobie comments that  Lemmons had a special gift, a touch and was not like the fake horse-whisperers.   My guess is that Lemmons was a true horse-whisperer and certainly  a communicator extrordinaire, much like  Frederic Pignon, of Cavalia. But unlike Frederic who strives to give freedom to the domesticated animal, Bob Lemmons strove to take freedom away.  Bob Lemmons was a Judas Horse. But Lemmons was the real thing, an original part of history.

To read more about Bob Lemmons, look for “the Mustangers” by Frank Dobie.  It’s easy to find on line.  And also take a look at http://www.tshaonline.org/handbook/online/articles/LL/fle72.html for an article with more historical facts.  If you’d like to pass this story on to children send them to the library for  “Black Cowboy, Wild Horses” by Julius Lester and Jerry Pinkney.